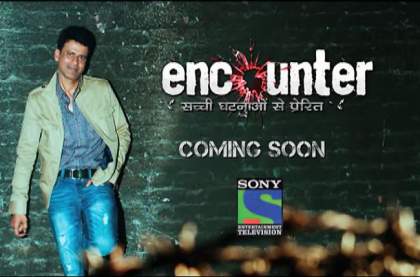 Encounter is an Indian crime television series, produced by Endemol India for Sony Entertainment Television and Sony Entertainment Television Asia. Its central plot will be based on 35 encounters in Mumbai over 36 one-hour episodes. Premiering on 11 April 2014, the show will air tri-weekly on every Friday-Sunday at 9 PM IST, and will be presented by Manoj Bajpayee. The series will end in the late June 2014.

Sony Entertainment Television has always struck gold with their crime based shows namely CID (Fireworks Productions) or Crime Patrol (Optimystix Productions) and Adaalat (Contiloe Telefilms). And now the channel is all set to churn out another show on the same lines titled Encounter. As the name suggests, the show will be based on encounters that happened in the country and the back story behind each such case. And to add up some star value, the channel has roped in talented actor Manoj Bajpayee to host the episodes. Interestingly, the actor who went on to impress the world with his films like Gangs of Wasseypur, Pinjar, Zubeida and Rajneeti, had started his acting career on TV with Doordarshan’s Swabhimaan. The actor has shot for the promo and the show will go on air mostly by end of next month. It will be for viewers to see whether Manoj anchors the show completely or will just be seen in the initial episodes. We tried calling Manoj but his phone remained unavailable. Representatives of the channel chose not to comment on the same.