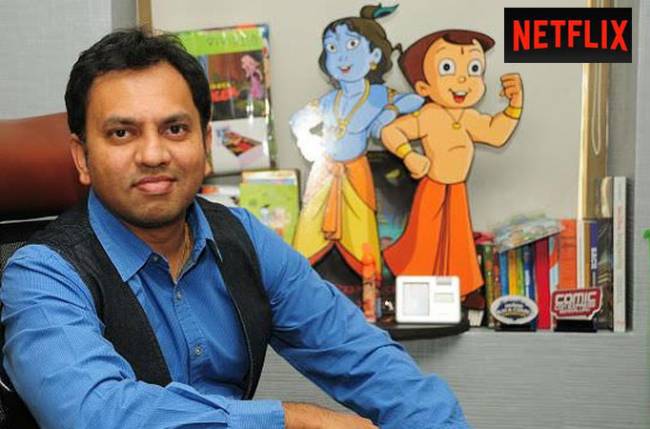 Mighty Little Bheem, American internet entertainment company Netflix’s first kids’ original series from India, will not include any dialogues, but music will play an integral role in weaving together the story.

The move has been made to add a global twist to the story, and give it a dimension which resonates with the universal audience.

Based on Chhota Bheem, Mighty Little Bheem is the first pre-school targeted series of the franchise. It is produced in partnership with Green Gold Animation, one of India’s leading animation studios and the makers of Chhota Bheem.

Rajiv Chilaka, Founder and Managing Director of Hyderabad-based Green Gold Animation and the creator of TV shows like Krishna and Chhota Bheem, said the web series is a “completely different” world.

“The TV series and this one are completely different. In the TV series, Bheem is a nine-year-old. It is a different thing. Now, the challenge is to tell a story for pre-schoolers from two to six years of age,” Chilaka told IANS on the sidelines of the ongoing 48th International Film Festival of India.

“We are showing Bheem as a baby to go with a global audience. Bheem will be a toddler, about 15 months old. Bheem cannot talk. It is a non-dialogue series meant for pre-school (children). The series will show how Bheem looks at things,” he added.

Expected to debut worldwide in 2018, the animated adventure comedy series will be about a strong, brave and intelligent hero named Mighty Little Bheem travelling through his hometown on crazy adventures, often in search of a ladoo. The series will go to an audience across India and 190 countries worldwide.

“Music will play a very strong role. The advantage of doing a non-dialogue show is that it is universal, so everybody will connect more.”

Chilaka says going digital with content is the way forward.

“Today, kids watch more on phones, or TVs rather than a theatre. We are happy to address the kids (via the new medium),” he added.

He also talked about how he is making his dream of going global a reality.

“Last year, we step up a studio in Los Angeles. So far, we have produced shows for the Indian market and we have really succeeded at it. We know the medium of animation and kids, but our stories have to be a global player. They have to make stories for the world market.

“So, we have to get writers from the world market so we started with LA studio. We are doing visual development and trying to develop scripts which will not work in just India but global.”

Apart from that, Chilaka says they are also working on a project with Amazon Studios and Disney.