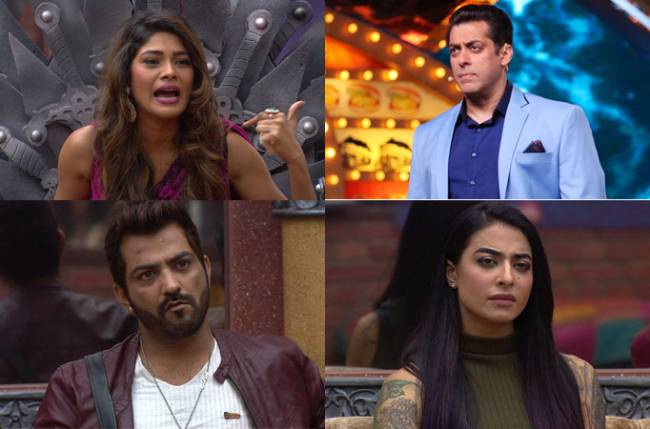 After surviving a rough week of challenging tasks and series of fights, Salman Khan kick starts Bigg Boss Weekend Ka Vaar episode by congratulating Manveer for winning ticket to finale week. Talking about how Manu and Manveer fared in the mall activity, Salman tells them that they have finally attained the celebrity status and will no longer be addressed as common people from hereon. Addressing the elephant in the room, Salman gets on to discussing Bani and Lopa’s infamous fight that brought the house down. After hearing both Bani and Lopa’s side of the story, he tells them that both of them were at fault and it was completely unpardonable. He also adds that they could have handled the pressure and the situation in a better away rather than making it ugly and brash. Condemning their actions and reactions, Salman says Lopa and Bani stooped to a new low just like Swami Om.

Moving on to the Khalnayak Kursi, Salman asks the housemates to nominate one contestant who deserves to grace it this week. Except for Rohan, everyone takes Lopa’s name as the Khalnayak of the week. Supporting it with a reason, housemates say that Lopa’s attitude towards Bani was not acceptable and she went a bit too far by making remarks about Bani’s mother. On the contrary, Salman does not agree with their decision and points out that it was Bani’s fault since she first started it by making personal remarks at Lopa and dragged her family into it. Supporting Lopa further, he says that she doesn’t deserve to be on the Khalnayak Kursi. In her defense, Lopa says that she has never used her father’s money for her own happiness but has given them more as a responsible daughter. Lopa also says that since the time she has stepped inside the house, she is being targeted at every stage and its seems like she has lost all the respect that she had gained so far in her career.

Furthermore, Salman gives Manu a piece of his mind and says that his spitefulness has become very evident in the recent past. Salman adds that while he claims that Bani engages in a lot of grapevine conversations, it is Manu who does it more often but never owns up to it. Manu defends himself by saying that if his comments are not causing any harm to others then he is not doing anything wrong. By the end of the discussion, Salman asks Bani and Lopa to bury the hatchet and hug each other. He concludes the episode by evicting one contestant out of the nominated ones.

After surving for 13 weeks in the game, whose journey will come to an end closer to the finale?