After playing Dr. Gulati, Sunil Grover to ENACT a character based on Arnab Goswami..!

The Nation Wants To Know if there is truth to it 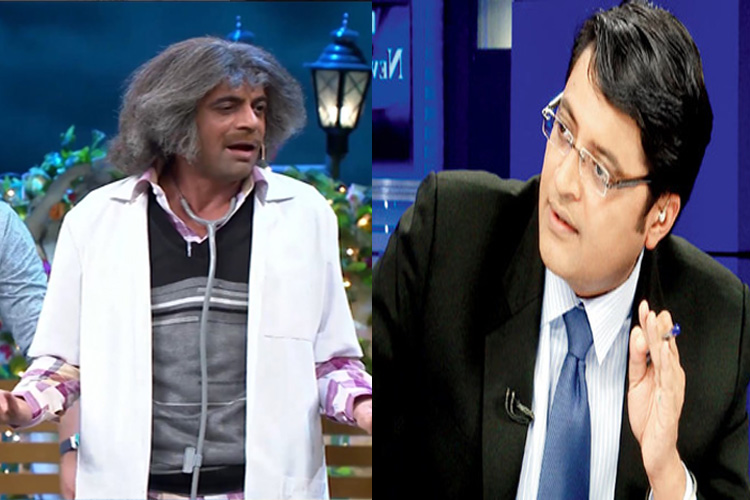 Actor-comedian, Sunil Grover can certainly be termed to be the heart and soul of ‘The Kapil Sharma Show’, where he has managed to steal the show in every single episode.
Be it playing the now-iconic, Dr. Mashoor Gulati, or various characters; Sunil Grover becomes the saving grace of an ‘at-times’ dull show.
While Sunil’s comic prowess is legendary, people already know that he is a fantastic actor too, where he has been a part of movies since several years. His most recent and notable performances include the ones in ‘Heropanti’ and ‘Gabbar Is Back.’
And now the actor has bagged another film, which is titled ‘Coffee With D’. And just when you wonder what character will Sunil be playing, here is a surprising piece of news for you.
Sunil will be playing the role of TV journalist named Arnab Ghosh.
Does the profession and name ring a bell? Exactly! As familiar as it sounds, there is an uncanny resemblance of the character to the controversial and popular TV journalist, Arnab Goswami.
In fact, according to sources, the character has been sketched out on the lines of Arnab Goswami.
However, when Sunil was asked about the same, he said that though, Arnab Goswami is an entertaining journalist, but he is in no way trying to imitate him. It is the director’s call to name a character and he has chosen this name.
But, Sunil also admitted that, subconsciously, he may have picked up a few attributes from Arnab.
Similar to Arnab Goswami or not, we certainly cannot wait to witness Sunil’s performance, can we?