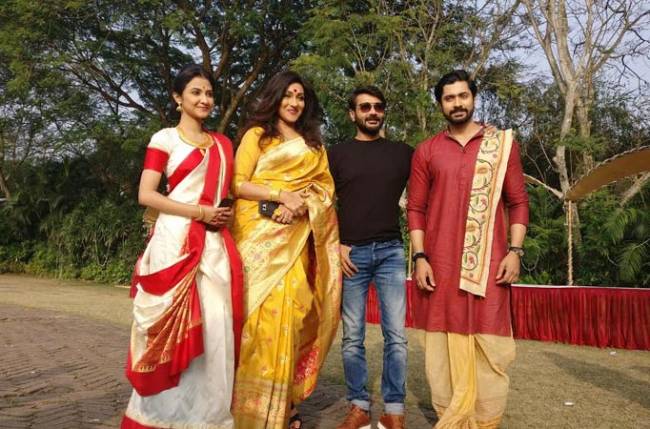 Readers, now we bring more information about the upcoming soap.

Well, Vandana Films and Enterprises is producing the show and Rahul Mukherjee is its director.

Apart from Rituparna and Prosenjit, the other big name that is associated with this show is Anupam Roy. Yes, the award winning music director of Tollywood has been roped in by the makers to score the music of the show. This will mark Roy’s television debut.

Shibaji Panja, producer of the show, is happy to have Prosenjit and Rituparna in his show. Complementing Rituparna, he said, “I was curious about the lady who can do Dahan as well as Sashurbari Zindabad” and about Prosenjit, he said, “This is the first time we are working professionally. I feel blessed.”

Prosenjit and Rituparna will be seen in around 25 episodes.

Speaking about the plot of Subho Drishti, Rahul said, “It’s a family drama revolving around the relationship between Subho and Drishti. Subho is a self made man. After a lot of hard work, he has become a business tycoon. His sister Antara is the apple of his eye and he can never say no to her. So, one fine day, his sister tells him that she wants to get married to a guy named Abir. But Abir has a condition. He will marry only after his sister, Drishti, gets married. So, in the same mandap both the brother and sister will get married to Drishti and Abir respectively. The story will begin from here.”

Deborshi Banerjee is playing Abir while Oindrilla Bose will be seen in the role of Antara.

So, gear up for the show. It will start from January airing every Monday to Sunday at 7.30 pm.