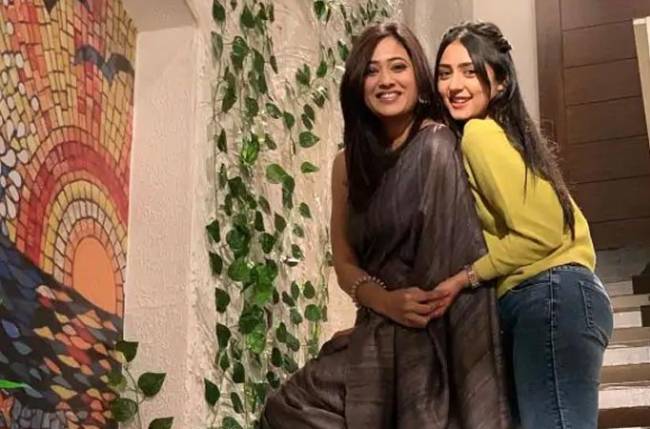 It’s time for all Shweta Tiwari fans to rejoice, as the actress has resumed shooting for Mere Dad Ki Dulhan. Yes, after a three-month-long unexpected sabbatical, Shweta has finally begun shooting for the show again. She is back in her on-screen avatar as Gunnet Sikka to spread the magic of her charm again, and make heads turn with her awe-inspiring performance. The beautiful actress recently took to her social media handle to share her ‘happiness’ of resuming shooting after the break.

Shweta shared a fun-filled picture on her Instagram handle with her co-star Anjali Tatrari aka Niya Sharma from the sets of the show. The two beauties posed for a quirky yet ‘safe’ selfie together. Yes, they followed all the rules as per the guidelines issued by the Government. They were seen with their masks on. Though their faces weren’t visible as they were covered in masks, they were certainly elated to be back in action, and their glittery eyes are proof of that. While Shweta was seen wearing a shimmery grey and white dress, Anjali decked up in blue.

The two co-stars wore quirky masks as they posed for the came. Shweta captioned the picture as, ‘Stay 6 feet away,’ which was also written on her mask. As soon as Shweta posted the picture, her fans went gaga and were excited to know that now they will soon get to watch fresh episodes of Mere Dad Ki Dulhan. Fans showered Shweta will love and compliments. Even Anjali dropped in a sweet comment that read, ‘Prettiest person.’ Shweta who is a huge bibliophile also carried her books to the sets, as she was seen reading them during her leisure time.

Meanwhile, Shaleen Malhotra will soon enter the show. He will be paired opposite Anjali Tatrari. Before lockdown, the show was focussing on Amber (Varun Badola) and Guneet’s (Shweta Tiwari) love story. So, some major twists and turns await in the upcoming episodes.

For more news and updates from the world of television and Bollywood stay tuned.